Baby on a Leash: A Primer

At this point, most of us have witnessed a Baby on a Leash (BOAL) at least once in our lives. In my personal experience, the most common milieu for a BOAL encounter has been the airport. For some reason, I have always had more than a passing interest in the BOAL phenomenon. I have actually spent countless hours studying this and have even created a field of research which I have dubbed BOALogy. At this time, I would like to share some of my findings with you.

The initial concept of the baby leash was conceived by Frank and Mildred Coopersmith of Des Moines, Iowa in 1950. Frank and Mildred were model citizens and very active in their community as members of the PTA, the Rotary Club and the Society for the Advancement of Bondage and Discipline – Des Moines Chapter. It was during a bondage demonstration held in the tornado shelter on the couple’s home that Frank forgot of the couple’s “safe word” (it was petunia). The act the couple were demonstrating (which I will not describe here) and Frank’s forgetfulness led to the accidental impregnation of Mildred. Soon thereafter, the couple’s first son, Frank Jr. was born. Frank Jr. was an active child and what Mildred often referred to as a “little handful.” After several embarrassing public incidents with Frank Jr., most notably one involving a calf at the Iowa State Fair, Frank Sr. and Mildred sought to avoid future embarrassment.

While Frank Sr. earned his livelihood in insurance, he was also a “tinkerer” and he would spend countless hours in his garage creating anything from doll house accessories to chafe-resistant ankle cuffs. Frank Jr.’s debauchery had Frank Sr. spending countless hours in the garage looking for anything that would remedy future embarrassment for the Coopersmiths. With necessity being the mother of invention, Frank Sr. had an idea and, much to the dismay of Mildred, he. modified her favorite toy, a leather leash with a jawbreaker muzzle option, into one of the first rudimentary child restraint systems; the neck leash.

Believing in the commercial potential for the neck leash, Frank Sr. sought and received a patent for the restraining device and launched the Coopersmith Restraining Systems (CRS) line of child neck leashes. Unfortunately for Frank Sr., this story did not end happily. As it turns out, the stiff design of the neck leash coupled with the inherent fragility of most children’s necks resulted in numerous severe injuries. Ultimately a successful class action lawsuit against CRS was brought forth claiming negligence and Frank Sr. was left penniless.

As fate would have it, however, this was not to be the end of the child restraint system. On a trip through Iowa in 1955, a very successful entrepreneur happened upon a parent with a child in tow being secured by a CRS neck leash. Intrigued by the concept but immediately seeing the faulty design, the entrepreneur patented the revolutionary harness system that has defined the BAOL standard still in existence today. While the entrepreneur was not sure how popular the device would be, he felt the harness system could be modified to serve as a delivery system to help advertise his company. With the addition of a popular character to the back of the harness, this new baby on a leash system could be the marketing tool to take his growing empire to the next level. And the name of the entrepreneur? Walter Elias Disney. You may know him as Walt Disney. And now you know the rest of the story. 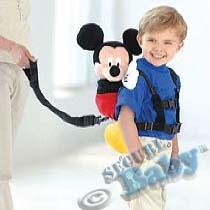